AutoTips Sensor Page:
The computers on most modern cars take inputs from a number of sensors and use that information to calculate fuel injection, timing, transmission operation, and a number of other actions. Not all cars will have all sensors. Here are a few typical sensors and what they do. Computers in modern cars will have a range for expected readings for the sensors, if one falls out of the expected range, the computer can store an error code. Sometimes, this will also trigger a SERVICE ENGINE or similar light.   A mechanic can read these codes, or on some cars you can do it yourself. See the book "Sure You Can" from Wells Mfg. Corp, an excellent book (under $5) to carry in the glove compartment of your GM, Ford, or Chrysler product.

MAF Sensors or Airflow meters measure airflow into the engine. Click on the images of the engines on the Underhood page to see mass airflow sensors on the engines.

MAP Sensor (Manifold Absolute Pressure) Measures the air pressure in the intake manifold. Changes in engine operation and speed will affect the MAP sensor reading, which the computer uses in fuel and timing calculations. Often it will have a single vacuum line connection plus an electrical connection. Some turbo charged cars also use the MAP sensor to measure barometric pressure.

Knock Sensor or sometimes called a Ping Sensor - Listens for engine knock and the computer adjusts timing and fuel to compensate. Fuel, temperature, engine load, and engine age are some of the things that affect ping.

MAT (Manifold Absolute Temperature) Sensor Measures the air temperature entering the engine. These are typically located in the air stream, as in the air cleaner housing, or the intake manifold.

Oxygen Sensor: Sometimes called O2 sensor, measures oxygen in the exhaust of the engine. The computer uses it to adjust the fuel mixture delivered to the engine. They normally do not have any output until the temperature of the sensor is heated by the exhaust to about 600 degrees F. A typical output voltage runs from a few tenths of a volt to 1 volt, depending on how lean or rich the exhaust is. When they fail, symptoms can include rough idle, poor milage, dying at stop signs, and poor performance. 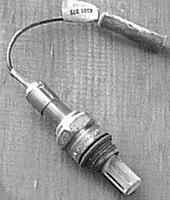 O2 Sensor is located in the exhaust manifold.

TPS (Throttle Position Sensor) Measures the position of the accelerator pedal. Typically mounted on the throttle body on the engine. The computer may use both the absolute position (how far the pedal is pressed down) and rate of change (how fast you press on the pedal) to use in fuel and timing calculations.

Temperature Sensors - Coolant and air temperature sensors measure engine coolant temperature, used to by the computer in timing and fuel calculations, and on some cars the coolant sensor is also used by the computer to turn on or off the radiator fan. Some vehicles have a separate sensor to control the radiator fan. Failure of either sensor can cause rough running, rough idle, poor milage.

Speed Sensor - Measures vehicle speed and / or distance for the computer.